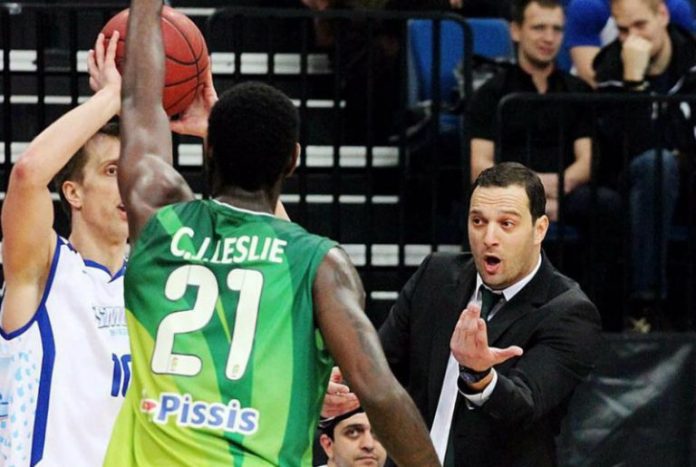 Global Basketball Summer League 10th season it’s over and like every year Darryll Reshaw (master mind and owner of GBSL) plan succeed, he again manage to provide to all the young atheltes that participated in the event a great opportunity to expore their game in order to find a job the upcoming season.

GBSL takes place every year in Las Vegas and it’s an event that grows through the years and gives a great opportunity to elite athletes for exposure through the games,being educated through the seminars that take place during the event in order all of the young man to take the maximum feedback from the international coaches,ex players , that work in the staff, so the can be ready to face the future difficulties as professional athletes. Among the coaches that participted this year it’s a guy that every year finds a way to suprise more and more people in basketball community around the word. The Greek Cypriot coach Linos Gavriel worked really hard during his 20 year carrier to gets to a point to become a professional basketball coach in a sport that he fell in love with back in 1987 when Greek National team won back then their first ever Gold medal in European championship and like all the kids in his age in Greece and Cyprus he stuck with the game,the difference with him is that he manage to be a pro at it something that few of them did.

Everyone around him knows that he didnt have a lot of help during his carrier or opportunities like others did and the main reason is that athletes or coaches that live in Cyprus are underrated comparing to Greek athletes and coaches that live in Greece (Cyprus population is around 1 million and in Greece 10 million citizens). Despite that he did pretty well so far and the most important of all he did it on his own “I always believed is all about hard work,staying positive and believing in your self whatever happens, he said” Linos always finds the way to succeed ,back in 2012 he became the first ever coach in any sport in Greece and Cyprus to sign a contract in a continent champion(Étoile sportive du Sahel,Tunisia ) ,the same year he was nominee for the awards Man of the year in Cyprus becoming the only one ever from basketball community to achieve something like this,and all this in the age of 36.

Linos is the only coach in any sport coming from Greece or Cyprus to win a championship and a cup in two different continents, quite impressive right? But his achievements do not end up here, as humble as he is and as much as he wants to avoid the spotlight we need to keep going, he participated in 18 finals last 10 years as a head coach and won 11 titles, he took his teams to the top 8 and top 16 of Fiba Eurocup having always a smaller budget that most of the opponents he face ,won with his teams against great clubs such us Vareze (Italy), Galatasaray (Turkey), Astana(VTB), Samsung(Turkey) and many others. This summer did something different but still impressive, he became the first head coach from Cyprus and one of the few from Greece to participate in a summer league in Las Vegas and guess what? He won a title again! His team Greekcypriot connect beat in the finals Pointstreak with the score of 71-65 the team of the legendary NBA player Darrel Armstrong (who’s is currently the assistant coach of the NBA team Dallas Mavericks) and won the championship in Session B of the Global basketball Summer league.

He was really happy and excited, as he said, to help the young American rookies to see the game from a different point of view, to learn the European culture in order to be ready for their first professional contract. About the event Coach Gavriel said: “It was really a true honour to be a part of GBSL 2017,I want to thank Darryl Reshaw inviting me here ,it was a lifetime experience.What Darryl , Lewis (Lewis Lofton is the director of players development and a legend in Europe being one of the best guards ever played in Poland) and his staff are doing here is a blessing ,they are helping young people last 10 years giving them an opportunity and so many weapons to face the future, I enjoy it and I was happy to be a part of it and being around great individuals and learn how the American culture is”.

Linos Gavriel just started, he is just 41 and he already won 11 trophies as head coach and 3 as assistant, participated in 10 European competitions, 5 times as head coach and 5 times as assistant coach, 1 time in world championship as a head coach with Cyprus national team, and 4 times in Eurobasket qualifying round as an assistant coach .”Its not about me ,it’s about teamwork and hard work ,it’s about creating a culture on how we suppose to work to win and what is our mindset to be consistent on wining in basketball and life ,I was blessed cause i always had great players and great people around me and that’s why we did what we did as a team.Whoever didn’t fit in ,simply we send him home,to keep the environment healthy, I was lucky to be around my players and the coaches I worked with all this years ” Among others many legendary players played under him such as Primoz Brezec( 10 years NBA veteran), Todd Day (NBA and USA team legend), Dalibor Bagaric (Europe and NBA), Rodney Bufford (NBA and European scoring machine), Jo Jo Garcia (UTEP and European legend), Thaddeus McFadden (PAOK SALONIKI GREECE scoring machine), Giannis Gagaloudis (Greek legendary point guard played for panathinaikos and Roma italy in Euroleague), Makram Yasmine Ben Romdane (ACB, Best African player 2012, 2013), Aleksandar Radojevic (NBA).

Linos started coaching back in 1997 while he was still playing and studying physical education in Thessaloniki, Greece where he graduate from Aristotle University with basketball specialisation back in 1999: “Thessaloniki is a basketball city,you need to live there to understand what I mean, people go crazy with Baketball in daily bases ,it’s like it was ment for me to be there, to live and work for 6 unforgettable years, I will never forget that period of my life cause I took so many things from the city except my basketball diploma”.

From 2001 until 2007 he worked in Cyprus powerhouse Apoel Nicosia as an assistant coach, head coach and director of young players development (among the players was the Euroleague young star and NBA draft for Brooklyn Nets Alexander Vezenkov of Barcelona in his first steps in basketball). In his years in Apoel he brings 4 championships with the junior team and the impressive is that the juniors team last title was back in 1979. From 2007 until 2011 he worked in the legendary club AEL Limassol (the club with most titles in history of the country) bringing 8 titles and 3 great seasons in Fiba eurocup which he manage to qualify to top 32,top 16 and top 8 of Europe coaching a great women’s team that among others they had the ex WNBA and gold medalist in Olympics games and world championship Chamigue Holdsclaw, Betty Lennox first scorer in WNBA Daliborka Vilipic ex WNBA player and European legend and many others. The next season (2010-2011) he took over the men’s team and from the 6th position in overall ranking he manage to take the team to both finals playing for championship and the cup.

In 2011 he returns for one year again in Apoel as a head coach and from 2012 until 2015 he coaches in Tunisia with the continent champions Étoile du Sahel. In Tunisia he manage to leave his mark,won 2 titles in 3 years and participated in 2 continent finals with 2 different clubs (Étoile sportive du Sahel and Rades ): “I had 3 beautiful years in Tunisia, I can easily say that I felt more comfortable there than working home,I love Tunisia and honestly I miss many of my friends there”. Linos was also a professor in the University of Cyprus (2008-2012) and the Vise president of coaches association (2007-2012).

From 2015 until 2017 he won the championship and the cup with Powerhouse club AEK larnaca (the first team of the NBA legend Darrell Armstrong 22 years ago in his rookie season, Linos and Darrell met in the finals of Global summer league this year).With Aek he manage to live beautiful moments, despite the championship and cup he took the team in top 16 of Fiba Europe cup in the first season that the club ever participate in European competition.

Coach Gavriel said: “For me the relationships I had with my players, the coaching staff and the people around the team (Management and fans) have bigger value than any trophy we won. What is important for me in my carrier so far is if I influence positively either my players game or character through the years ,if I made them realise that they need to be mentally tough,humble and always work hard ,that’s my championship,not the real ones . To be fair I will say that that trophies were a result of hard work and teamwork from everyone ,even the ball boy,but important is if in the end of the season everyone in the team became a better person, better coach, better basketball player”.

Coaches that he worked under them and as he said :”I was lucky enough to work with many coaches with different philosophy and background, in basketball and in life, so I took something from each one of them and use it to create my own philosophy and the way I see things “: Nick Linardos(Duke, Limoges, Greek national team) Elias Armenis, Dimitris Tsolakis, Dimitris Liogas, Giannis Christopoulos (China national team, Bedjin Ducks, Greece), Zoran Martic (Slovenia national team), Charles Barton (USA, ARIS Greece, Skyliners Germany, Maccabi Tel Aviv). 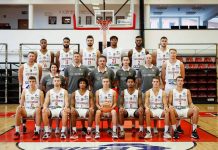 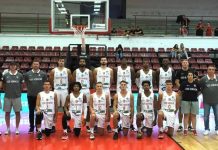 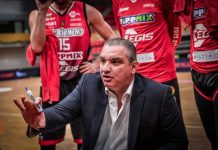 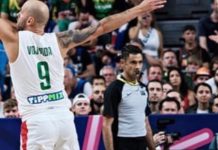 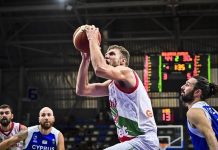 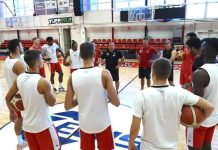 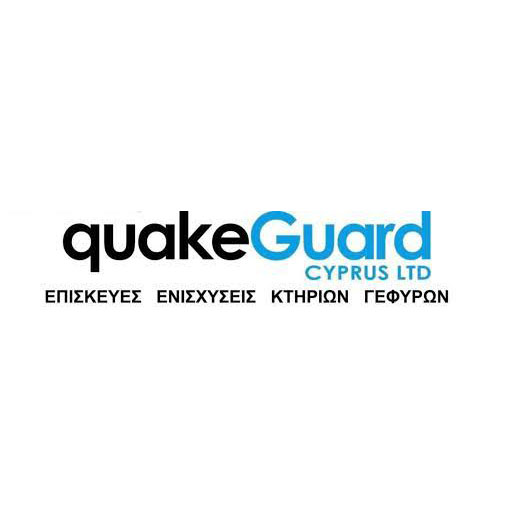 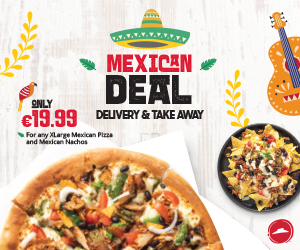 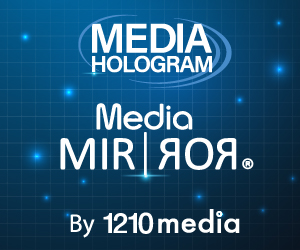